The All Electric Home

by Rachel White and Paul Eldrenkamp

Even before the September 2018 gas explosions in Lawrence, Andover, and North Andover, we were encouraging homeowners to wean themselves from the gas grid. To be honest, we weren’t all that concerned about explosions, and we still aren’t. Although we don’t want to diminish the tragedy that occurred, we are grateful that it represented an extremely and mercifully rare kind of accident. We want to get homes off of gas (or from oil for that matter) because we believe it’s the surest path to decarbonizing household energy usage.

According to a recent report by the Northeast Energy Efficiency Partnerships (NEEP), electrifying energy uses that are currently met by fossil fuels is the critical third prong in a three-pronged strategy to meet our regional greenhouse gas emission reduction targets (the other two prongs are energy efficiency and carbon-free electricity). In homes this means replacing fossil fuel burning appliances with ones that run on electricity.

Here’s what a transition to an all-electric home would look like, in outline form.

A gas furnace or boiler would get replaced with cold-climate air-source heat pumps.

Depending on the needs of the house these can be ducted systems for minimal visual impact, wall-hung systems for maximum efficiency and cost-effectiveness, or a combination of the two approaches (this video produced by NEEP showcases one of our projects that combined the two approaches). In most cases we would recommend improving the home’s insulation and air-tightness as part of the mechanical system change over as it allows us to downsize the equipment, which saves energy and money to operate the system. 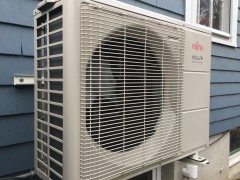 The latest generation air-source heat pumps are extraordinarily efficient—roughly 3 times more efficient than the most efficient natural gas heating systems available. Taking advantage of variable refrigerant flow technology, air source heat pumps can move on average about 3 kWh of heat energy from outdoors to indoors while consuming just 1 kWh of electricity. They’re less efficient on the coldest day—maybe moving only 1.5 kWh of usable heat while expending 1 kWh of electricity when it’s zero degrees. But during milder weather they are extremely efficient, moving as much as 4 kWh of heat with a 1 kWh investment when it’s 35 or 40 degrees out. It averages out very favorably over the course of a heating season.

For a small cost premium, the heating system also becomes a very efficient cooling system. The heat pumps simply run in reverse—taking heat out of the indoor air and pumping it to the outdoors. This is exactly what a refrigerator does (though with refrigerators, we think of inside and outside the refrigerator, not indoors and outdoors). Many of our clients who have converted fossil-fuel heating systems to heat pumps have not had central air conditioning before, so for them this feature is an attractive added bonus.

Electric clothes dryers have been common for many years, so electrification of clothes drying is not exactly a new frontier. The real push in efficiency for the past decade or so has been with clothes washers—using less (hot) water and wringing as much wash water out of the clothes as possible, in the spin cycle. (Hence the prevalence of front-loaders). As a result, until recently the efficiency of clothes dryers has been something of an afterthought; Energy Star didn’t even rate them. That changed a couple of years ago, and now you can purchase extremely efficient clothes dryers that use very little electricity, in particular when coupled with a high-efficiency washer.

We’ve written about cooktops before. We still believe that electric induction cooktops outperform gas cooktops overall. But we recently had a client who, after converting to an induction cooktop, asked us to reinstall her gas cooktop. Of course, we accommodated the request quickly and amicably. Clearly, we have some more work to do to convert people to induction cooking.

So what are the downsides to electrifying homes?

For one thing there are the costs, especially for heating. According to NEEP, market conditions in our region are such that it typically costs slightly more to heat with air source heat pumps than it does with a new high efficiency gas boiler or furnace—even though air source heat pumps are, on average, three times more efficient than the most efficient natural gas equipment available.

In our experience, the upfront costs of converting to air source heat pumps are also significantly higher than installing a new, high efficiency gas system, often twice as much. In part this is because most of the systems we install include at least some new ducting, which is more involved and expensive than a ductless installation.

Aesthetics of the ductless units can also be a downside, at least for some installations. We aren’t (yet) used to seeing heat pumps in residential settings, so the units can appear quite conspicuous if they aren’t located with care. One technique we have used to soften the visual impact is to locate a unit above or within bookshelves. The result is a purposeful, built-in look that many of our clients have found appealing.

It’s also worth noting that the widespread adoption of electric appliances for heating, water heating, cooking etc. will present challenges to the electric grid. For example, as more and more space heating needs are met by electricity rather than natural gas or oil, peak consumption will begin to occur in the winter instead of the summer. We will need to develop and deploy strategies such as energy storage and load shifting in order to adapt the grid to changing usage patterns.

All in all, we believe that getting off gas and going all-electric will eventually make sense for most if not all homes. Even now, many of our clients are replacing gas appliances with ones that run on electricity. Sometimes these replacements are coupled with the installation of solar panels (as in the house shown in the lead in image to this post). But sometimes they aren't. Even if your house isn't a good candidate for solar, or you aren't in a position to make that investment, going all-electric is a win for the climate.

So if you have fossil fuel equipment that is nearing the end of its life, we would encourage you to look closely at electrically powered replacements—and to reach out to us directly with any questions.